As a kid, did you ever dream of becoming a rock star? Imagined yourself playing on-stage for thousands of cheering fans? So did John Federico, our Vice President, and Strategic Projects Group Leader.

Starting from age three, he banged on pots and pans on his parent’s kitchen floor.  Some 20 years later, those fantasies manifested into reality when he played drums with Roger Daltrey of The Who in B. B. King’s Time Square arena for 4,000 people.

Driving John from his pans to the stage was an unyielding commitment to excellence. It compelled him to practice ceaselessly to become the best drummer he could and helped him build a successful construction career.

After a couple of years of denting pans, little Johnny walked with his dad to the neighborhood North End music store to buy his first drum set at the age of five.

John’s spark of enthusiasm ignited into a bonfire of commitment. At age nine, he started playing with his brother’s high school band. He practiced with the older kids for a few years and cultivated a taste for rock and roll music.

At age 13, John met not only his future best friend, Arthur but ‘the most important musical person in my life.’

Arthur, five years older, wasn’t sure about taking on such a youthful bandmate. But yielding to John’s pleas, the two soon joined musical forces and ‘never looked back.’

At this point, John was testing the limits of his family’s patience. He had a singular commitment to becoming outstanding. It’s a trait that would define much of his career, life, and music. He practiced for three hours every single day, seven days a week. Well on his way to his 10,000 hours, John’s blossoming talent was soon put to the test in a local radio contest. 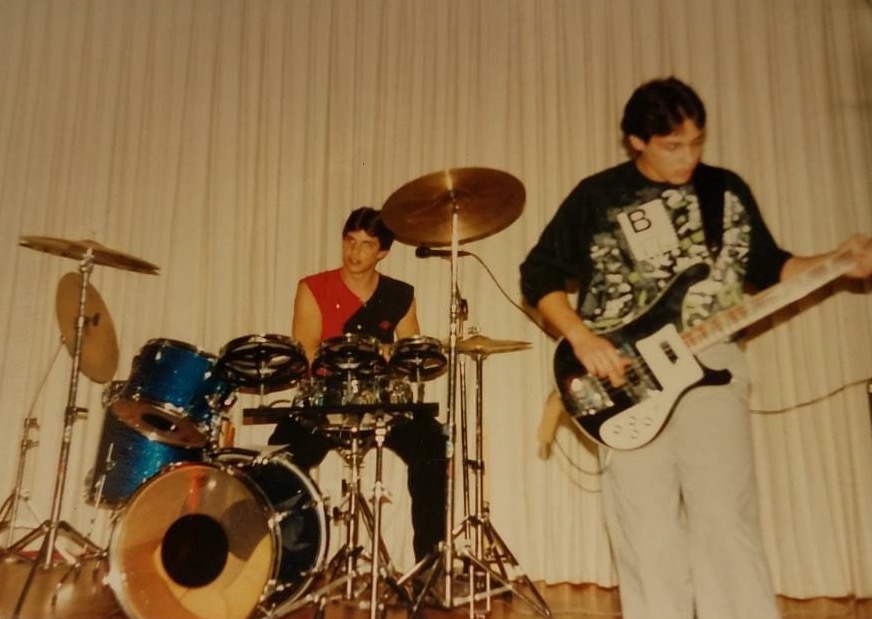 In 1985, Arthur and John entered the WBCN Best Band in Boston contest. It was a launching pad for musicians, and the winners would join the band ‘Extreme’ on their next tour.

At ages 16 and 21, John and Arthur walked out onstage to test their merit and play for thousands of fans.  In John’s words, ‘it was mind-blowing.’ The duo rocked Medford stadium and won the competition.

But this extraordinary accomplishment immediately hit a speedbump in the form of parental oversight. John was only partway through high school, and his dad was itching to have him join the family trade. Arthur’s parents also weren’t inclined to let their son give up on the med school track he was pursuing.

John can still remember the exact moment the two decided they weren’t going on the road. Instead of jumping into band life, he went to Local 22 that same day and signed up to work as a laborer instead. 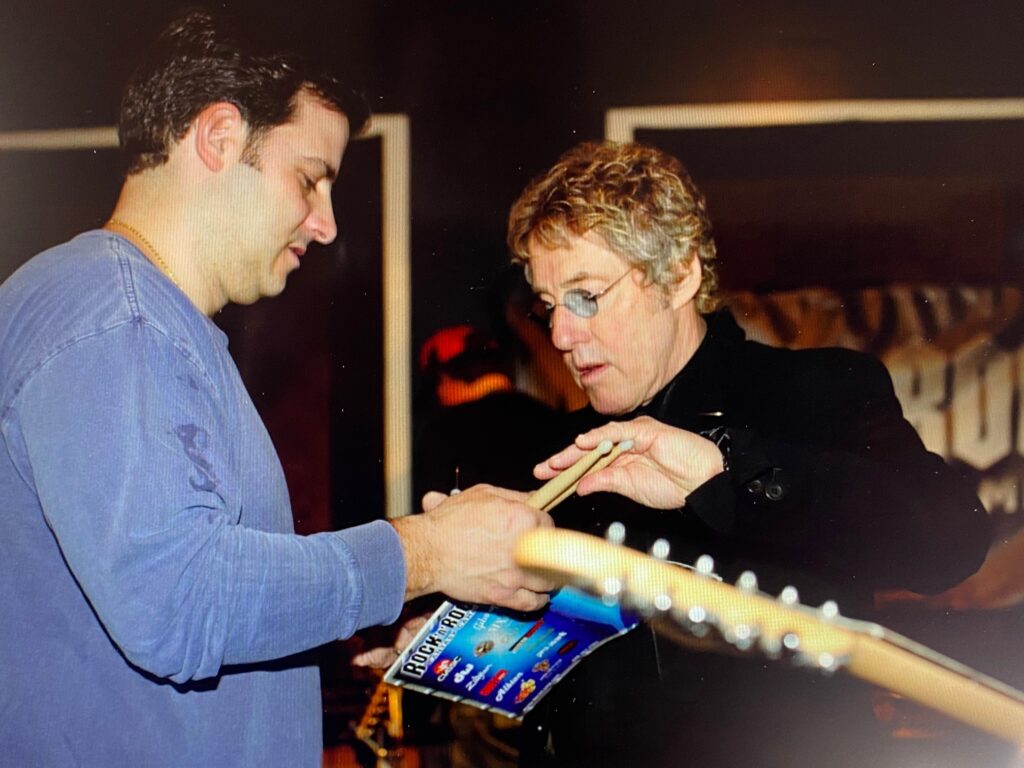 John continued to play his way through college, founding a construction business, and starting a family. Then in the early 2000s, he and Arthur got another shot at music history.

They auditioned for and were accepted into an all-expenses-paid trip to New York City to play for Rock and Roll Fantasy Camp. John and Arthur played with their heroes from the 70s and 80s, working through the competition for eight days.

They performed original material and ultimately won the whole event. As a finale, John had the incredible privilege of playing with Roger Daltrey of The Who in Times Square.

It was the definitive highlight for John and drumming. The competition was covered by the New York Times and Wall Street Journal. He got to be in the green room where so many incredible musicians had waited before him. And after they finished the set, he had the unique privilege of standing up and throwing his sticks out to the welcoming crowd of 4,000 people.

As he says now, today he could do that with a 200-person crowd, ‘but they’d probably throw them back at me.’

John recalls that his first-generation immigrant parents weren’t supportive in many facets of his life and didn’t have much to spare financially. But their commitment to helping him become a drummer was shockingly wonderful.

Laughingly he adds that he also became a ‘pet monkey’ for the family. He was asked to perform at every family function from holiday parties to weddings.

Support has characterized John’s drumming career. From his early days on the kitchen floor to his wife’s encouragement to compete in New York, he’s grateful for it.

It’s a quality that John tries to replicate today with his team at Commodore. To be supportive, to be patient. To help nurture talent and passion despite the occasionally challenging and hectic journey.

Since winning Rock and Roll Fantasy camp, John has also made an incredible impact in the construction world. He’s been a tremendous part of Commodore’s growth and used his trademark attention to detail and commitment to help strengthen our business lines and processes.

These skills are particularly prominent in how he approaches moments of no return. As he notes, “when you’re playing in front of a crowd with a setlist for charity, there’s no turning back, you can’t fail. You invited 500 people; they paid, you’re there to entertain them. It’s similar to our projects. Once you sign up, there’s no turning back. You have to do it.”

John’s compelled to be the best he can be in every aspect of his life. It’s who he is. When faced with those moments of no return, he rises to the challenge to execute with excellence.

John’s construction career has even filtered into his musical career. As a result of a lack of ear protection in his early years, he’s 60% deaf in one ear and tinnitus causes constant ringing in both ears. Today, as a strong advocate to exceptional construction jobsite safety protocols, John also advises all new musicians he meets to wear their PPE. But despite the ringing and hearing loss, John’s not done drumming.

When he’s not playing with fellow Commodore employees, one of his favorite ways to perform is at charity concerts for cancer research. After losing his mom to cancer, he enjoys being able to give back using a talent she so faithfully supported. Hopefully, in the Fall of 2022, they’ll be able to book a large venue and raise more for the cause. 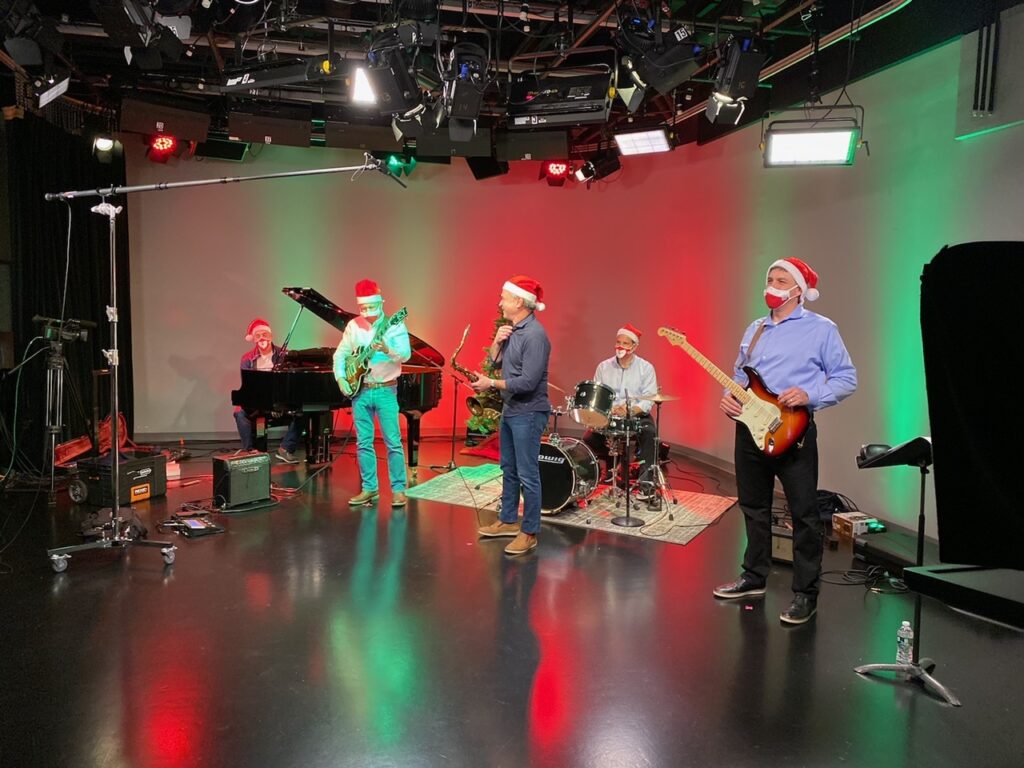 Dreams come in all shapes and sizes. Today, John is glad that he could build a stable, successful career in construction instead of living the often-rough life of a musician on the road. But also awed that he now gets to recall the impressive highlights of his drumming career, playing for thousands and winning prestigious competitions.

John’s a testament to the adage that if you work hard, you can find success on the jobsite, stage, or wherever your passion leads you.