It started with a rambunctious husky named after a power tool company.

Makita, like many of her breed, pulled hard on her walks. Denise, Commodore’s own Human Resources Manager and our second Focus on People feature, got so annoyed she eventually started jogging to keep up. Just one block at first, then maybe the length of a song, then two. The amount of time she spent running kept growing until this week, two decades later, when Denise finished the Boston marathon.

Not only did she finish, but in her own words, ‘it was the best experience ever, a party for 26 miles’. This probably isn’t how most of us would describe running a brutal marathon course that ends with a five-mile hill. However, from those early walks with Makita, Denise found a passion that’s pushed and rewarded her mentally, socially, and physically.

Keeping up with Makita helped Denise into the sport, but she kept running in large part because of the friends she’s made. Shortly after her kids began school, Denise met other moms with an interest in running. They started getting together regularly before school to run three miles. Then three became five, and five became 10, and 10 became a half marathon. Before you knew it, they were running marathons, sometimes together, sometimes apart.

Despite the many frigid mornings, dog bites, car doors slammed into, injuries, and literal blood, sweat, and tears, they persevered and enjoyed themselves. They created new traditions around running, like heading out on Thanksgiving morning to get some clarity before the holiday hubbub begins.

One of the fellow moms finished her 34th Boston marathon! 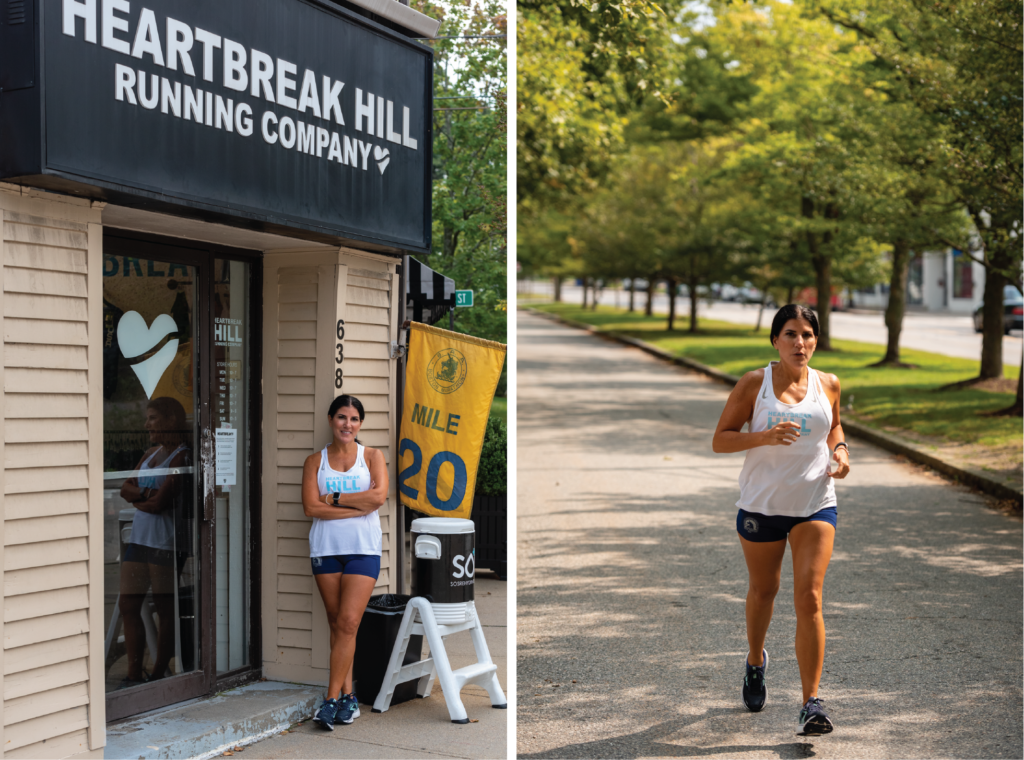 Aside from the chance to catch up with friends and get in some exercise, running and training for a marathon provides Denise with an opportunity to catch her breath (metaphorically) and clear her head.

It’s time she sets aside where she’s not competing with anyone, and there’s no one to hold her accountable but herself. There were days that, in her words, ‘sucked’ and days that were fantastic. But through it all, Denise recognized that it was her attitude that determined the success of her run.

And it’s this recognition of her agency and her capacity to push herself that Denise carries into her everyday work with Commodore and brought with her to the Boston Marathon.

Footballs and Twizzlers, but No Music

This wasn’t Denise’s first marathon, and she had no intention of running it three months ago. However, a friend called up with an opportunity for her to run by invitation, and she knew this was one bucket list item that she had to check off.

With 13 weeks to go, Denise started training. Thankfully, from running past marathons, she knew what it would take to get ready. She was used to the long grueling runs that help you physically prepare for such an extreme event. She was even pleased to do them in the summer heat rather than the winter cold that usually precedes the Boston Marathon.

Finally, on October 11, she started her 26.2 mile run at 11 AM and promptly realized her headphones didn’t work and she wouldn’t be able to listen to music at all.

But that didn’t deter her; more than anything, she knew that she would stop if she focused on how tired she was or how her body felt.

Instead, she kept going and felt herself smiling the whole time. She had family spaced along the course to cheer her on and take photos, kind volunteers handing out Gatorade, oranges, Twizzlers, and even some Boston College students throwing her a football.

She noted how inspired she was by the intense energy of the course. How enthused everyone was running and cheering alike. She was propelled by Facetimes with her family and the runners around her overcoming all sorts of obstacles to be on that course.

She ultimately pushed through the last few uphill miles by knowing her kids waited at the end. For the first time, they would see their mom finish a marathon. With each Facetime, they would call out that they watched her little GPS dot move, tracking her progress, getting a little closer.

And she finally made it, finishing in front of her family and experiencing a high like she’d never imagined.

Of course, the day wasn’t over for Denise, runner, and mom. It was her daughter’s 16th birthday, so the family went home to shower before heading right back out to celebrate. And hopefully, fuel up on water and electrolytes. 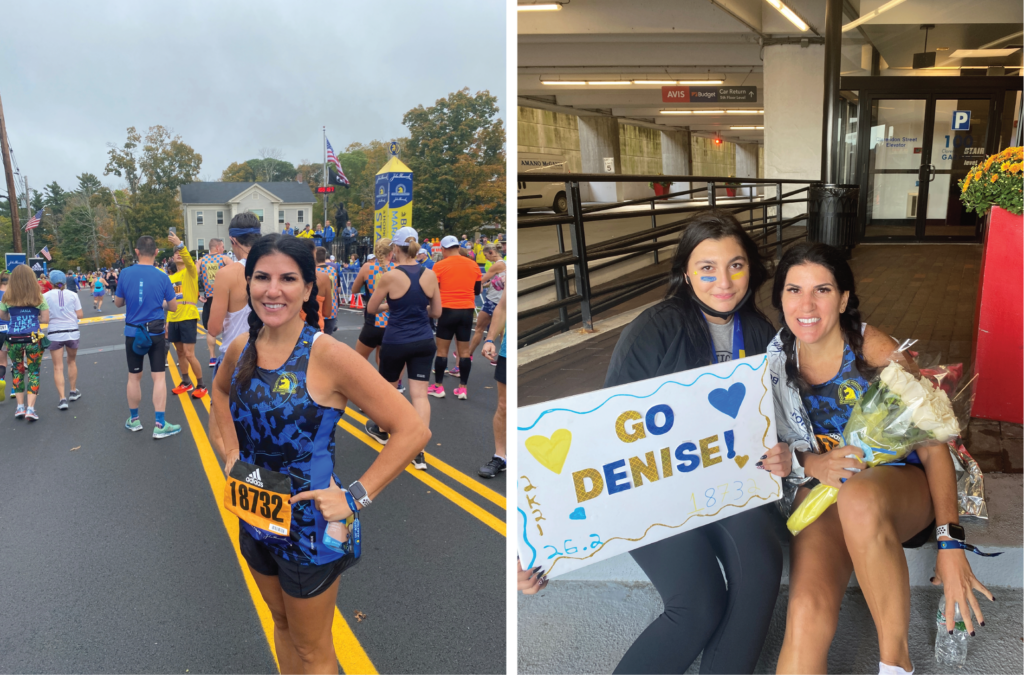 Do You Want to Run a Marathon?

Denise says anyone can run a marathon; you don’t even need a husky to get you out on your first jog.

However, she does recommend that you start small. Just get out running for a few minutes, then a few more. And before you know it, you’ll be running longer and longer distances and training for your next race.

Like in construction, she also says a strong foundation is vital. Start with the basics, build up your core, and create a running habit that can help you physically and mentally. She’s particularly valued yoga and a lot of stretching to help avoid injuries and shore up her strength.

Her last piece of advice is ‘don’t start your marathon experience with Boston.’ The course is brutal.

If you’re intrigued or just want to congratulate Denise on her incredible achievement, cheer her on, crazily enough, as she runs the Bay State half-marathon this Sunday in Lowell (less than one week after running Boston).